Perfect for the youngest, before returning to school, small magnet Cars 3 is a magnetic black-board where to attach the lovable characters of Walt Disney and at the same time doing exercises in writing with the magnetic letters or with the erasable pen included in the game. It will be easy and fun writing the first words or perhaps the names of the characters and live with fantasy their spectacular adventures! It is a game that develops creativity and imagination as well as introduce playfully to writing. Once the game is over, all can be closed in a large basket. 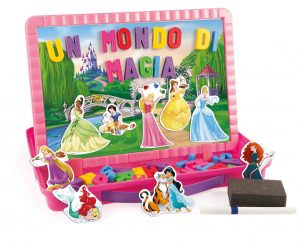 In addition to this version, Quercetti has presents small magnet “Princess”, entirely dedicated to the magical world of Disney princesses.