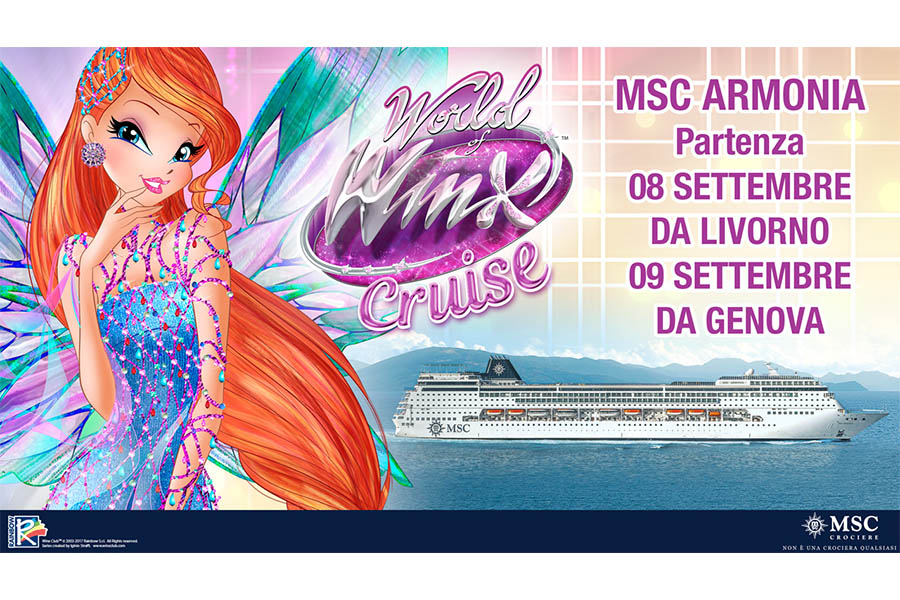 The Winx on board of MSC Sinfonia and MSC Armonia

Rainbow, the content company of Iginio Straffi, known throughout the world for its productions and multimedia brands, and MSC Cruises, the European leading cruise company with ships that sail all the seas of the world, announce a new Winx cruise entirely dedicated to the series “World of Winx” (co-produced by Rainbow and Rai Fiction, in association with Netflix) broadcast daily on Rai Gulp. Just like in the TV series, the cruise theme “World of Winx” will be an adventurous and fun trip with stops in Italy, Spain and France, ready to live the magic.

Given the consolidated success of previous editions, the partnership between Rainbow and MSC Cruises, two excellencies operating in the market for leisure and entertainment, continues even in this 2017 to offer an unforgettable holiday for the whole family.

Ready to leave from the port of Livorno on September 8th 2017 or from the port of Genoa on September 9th 2017 for an unforgettable journey made of magic and culture for the family, a moment of great fun for children who will be on board together with the most loved fairies all over the world. Together they will be able to play and have fun. For parents, instead, a real relaxing break, which may entrust their children to the thoughtful care staff of MSC Cruises.

Aboard MSC Armonia, there are in program many activities, all inspired to Winx: from “Winx Show” the challenges of dance, until karaoke on the notes of the most famous songs of the TV series, dancing and singing with their most favourite heroines, the MiniClub meet and greet with Winx and much more. The ship, besides being equipped with spacious club dedicated to young travelers from 0 to 17 years, also hosts an extraordinary Spray Park on the bridge pools, with fun water games between waterfalls and splashing water.

Moose Games, the gaming innovation division of award-winning Moose Toys, and Hunt A Killer, the immersive entertainment company, announced today that they have engaged in a strategic multi-year international licensing deal. Moose Toys will spearhead international...