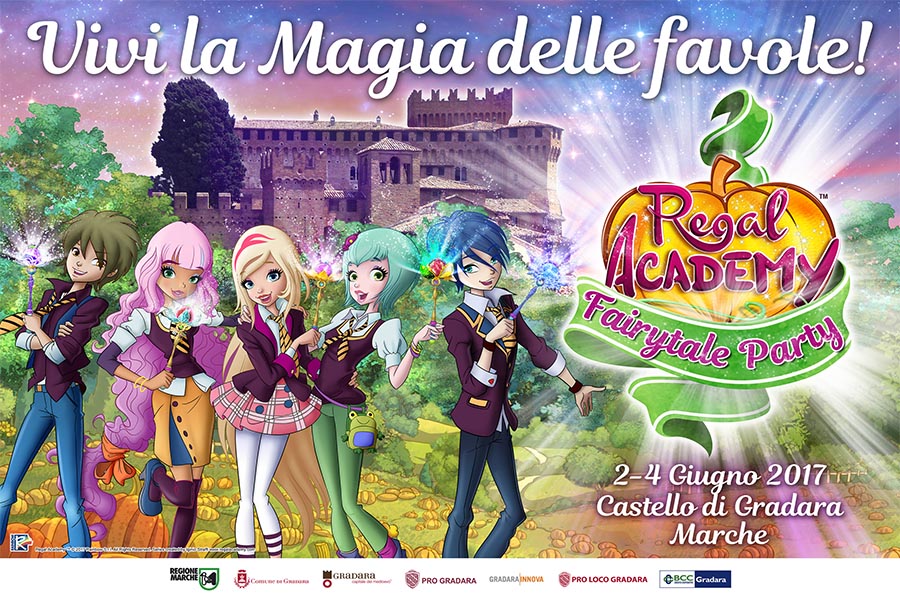 From the Grandmother Cinderella’s dance course to Doctor Le Frog’s potions: some of the “Regal Academy Fairytale Party” appointment that are not to be missed, airing from 2nd to 4th June 2017 at the Gradara Castle.

The fairytale weekend that everyone has been waiting for is almost upon us! Which one? The “Regal Academy Fairytale Party” of course! Children of all ages are invited to the Gradara Castle from 2nd to 4th June 2017 (Pesaro and Urbine Marche) with the Regal Academy protagonists, the animated series created by Iginio Staffi and produced by Rainbow in collaboration with Rai Fiction is on air every day with Rai YoYo – ironic and fun, the show tells the classic and most loved fairy tales in a modern fashion. The event, sponsored and promoted by Regione Marche, represents the window of Marchigian excellence.

So much fun! There are many activities planned for children and their families. A few examples? The dance course by the loveable headmistress, Cinderella: Who better than her, expert in ceremonies and parties, to teach young students the art of dance and poise? A space for creativity, on the other hand, with the lessons from The Beast, expert in dragonology: here participating children will learn how to create a magic dragon. For drawing lovers, the art course by Belle will guide students in the creation of drawings that are inspired by heroes of Regal Academy. And more: training and discipline, not forgetting lots of fun, in the archery course with Princess Iron Fan who will unveil the secrets to this ancient sport to participants. Magic everywhere in the potion course with the funny Dr. Le Frog not to mention the Magic formulas course by the punctilious and apple loving Snow White. While on the first it will be possible to make a perfumed “magic filter”, on the second young students can cast spells with their wands. Last but not least, to try out their skills and to be prepared for the Regal Academy series, the history of fairytales course is taught by Rapunzel, giving youngsters the possibility to challenge themselves with a final quiz!

The climax of the event is the Regal Academy Live Show: heroes from the stories will hit the stage, singing the most famous songs from the series and making the audience part of the fairytale fantastic show, full of magic and surprises!

And much, much more is set to happen. Spaces for creativity, imagination and, above all, for magic with wise fairytale heroes and their descendants – the “apprentice heroes” that are lead by Rose Cinderella, the ever-enthusiastic and shoe dependent granddaughter of Cinderella herself – who will show little participants and their families the magical atmosphere of Regal Academy.

The full programme for the event is available here:  http://www.regalacademy.com/it/fairytaleparty/event