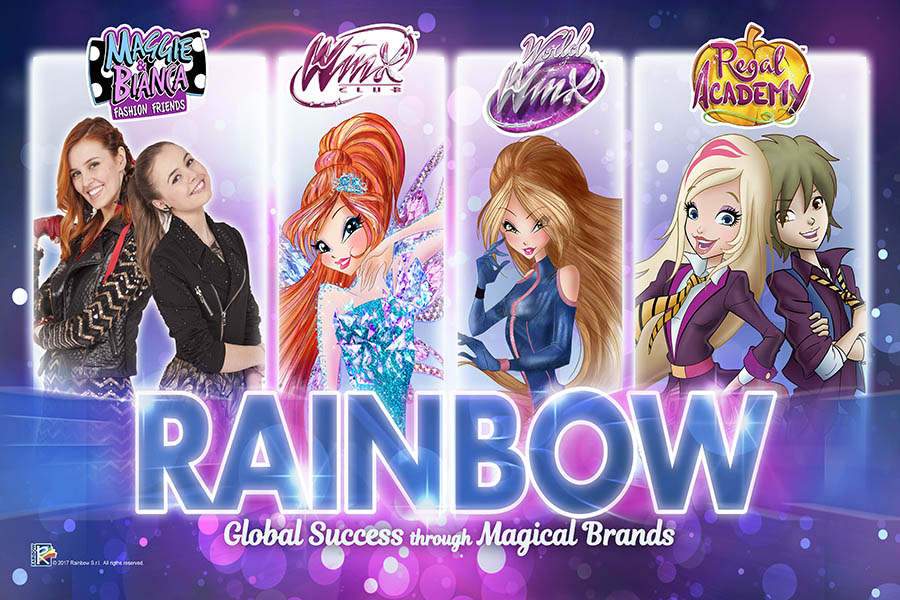 Rainbow will add colour and magic to the Las Vegas Licensing Expo through three of the hottest brands in world licensing: Maggie & Bianca Fashion Friends, Regal Academy, and World of Winx.

Maggie & Bianca Fashion Friends is a live-action dramedy that follows the adventures of Maggie and Bianca – two very different girls who meet at the prestigious Milan Fashion Academy. They discover each other and a host of new friends from across the world, as well as hidden secrets that change their lives forever. The show, which is Rainbow’s first full live-action venture, follows the themes of fashion, friendship and music and has been an enormous international hit.

The show was launched in Italy in August 2016 and is already a massive ratings winner on free-to-air TV in Italy on Rai Gulp, in France on Gulli, in Brazil on TV Cultura and will soon entertain German fans on Disney GSA.

Netflix is the worldwide VOD partner and launched across the US, Canada, the UK, Australia/NZ on March 31st 2017 and the rest of the world from September.

The massive and seemingly unstoppable success of Maggie & Bianca Fashion Friends has already led to two 50-minute TV movies, whilst season three of the show has started shooting in Milan and Rome.

The key elements of the series — fashion and music — are the perfect inspiration for consumer product development, as a number of major announcements have already proved. Strategic international partnerships include multi-territorial deals with Simba Dickie Group (master toy), Panini (sticker album and trading cards), Ravensburger (puzzles) Denver for ride-ons (bicycles) and Procos (partyware).

And the show’s great music content has led to a worldwide deal with Sony Music Entertainment Italy S.p.a  for the show’s first-ever album, which will be a collection of the best songs from series one and two! Not only is that but the MoodBoards – the band from the show – set to play a live event on May 20th, 2017 at Rome’s Auditorium Conciliazione!

Although the show’s roots are obviously television the addition of licensing and live events make it a total 360 brand proposition.

Regal Academy is a highly original and very engaging re-imagining of some of the best-loved children’s fairy tales. This hilarious animated comedy centres on Rose Cinderella – who thinks she is just an ordinary, normal girl. That is, until she discovers that the fabled Cinderella is actually her granny. This means she will not be going to a regular school but to the Regal Academy – a unique college founded by famous fairy tale characters.

The show’s innovative approach means that the fun, positive stories are narrated by Rose Cinderella and her new friends who are also part of the fairy tale dynasties. Series 1 has been released in over 100 countries over the last year, pulling in huge viewing figures across the US, Italy, Russia, Turkey, Brazil, France and elsewhere. Series 2 is currently in an advanced stage of production.

The themes and characters of the show make it a perfect fit for consumer product licensing. In fact the licensing programme is huge in scope, covering all the main categories and targeting many more.

World of Winx, an original series for Netflix based on the smash hit Winx Club, sees the six fairies familiar to millions from Winx Club take on their toughest challenge yet! The fairy friends travel to Earth to act as scouts for talent show WOW! and search the globe for talented kids. But all is not as it seems, as they soon uncover the evil activity of the Talent Thief – a mysterious and despicable villain who is capturing gifted children! To foil his plans, the Winx go undercover – hiding their true identities to outfox the Talent Thief, find his secret headquarters and protect the children of Earth. The show has been available on Netflix, where it has been released worldwide, since November 2016 is also currently screening on Rai Gulp in Italy, with upcoming launches planned on TV Zoom in Israel, Karusel in Russia, and Planet Coçuk in Turkey.

And there’s much, much more. As one of the one of the biggest animation studios in the world and a leader in kids’ entertainment, Rainbow has a lot of projects under way or planned. Want to find out more? Just visit the Rainbow stand: D196 on level one.