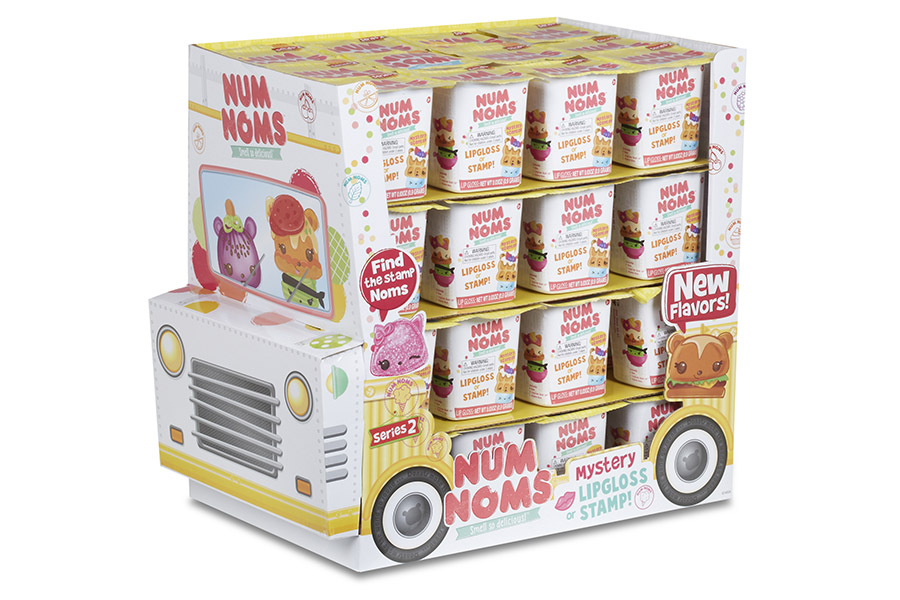 Leveraging the momentum generated by securing top rankings in numerous industry, media and retailer must-have holiday toy lists this past season, MGA Entertainment, Inc. (www.mgae.com) “MGAE”, the world’s leading privately held toy company, has secured another 40 new licensees for a total of 80 worldwide licensing partners for its hit property Num Noms™ the scented novelty + collectibles “novibles” that girls can mix, match and stack in more than 5,000 variations, creating a truly unique and engaging experience for themselves–and to trade with friends. The announcement was made by Juli Boylan, Global Head of Licensing, MGAE.

“From the first Num Noms licensed products – apparel, sleepwear and select accessories – to hit retail in the U.S. in fourth quarter 2016, through today, the brand continues to exceed our expectations, appealing to a wide consumer base of young girls, collectors and others with a keen appreciation of whimsy,” said Boylan in announcing the brand’s new licensing partners.  “We are very excited to be launching key categories this spring, and the full program worldwide in the fall.  Num Noms also continues to grow in the U.K. and European markets and so our focus as we head into Licensing Expo is to meet with potential partners in the ancillary categories, and further expand the brand in key international territories throughout the Asia Pacific and Latin American markets.”

This past holiday season, Num Noms, which first launched in the U.S. marketplace in December 2015 and targets girls ages 5-9, has fast become one of the top bestselling toys for girls and a runaway hit at retailers such as Toys”R”Us, Walmart and Target, and ranked in the top 10 of most Googled holiday toys! According to The NPD Group, Num Noms was the #2 Growth Property in Playset Dolls and Collectibles YTD February. On its own, the Num Noms Blind Bags Assortment ranked #4 in Playset Dolls and Collectibles and ranked #22 in Total Toys YTD February. (Source: The NPD Group / U.S. Retail Tracking Service/ January – February 2017 / Dollars)

Additionally, Num Noms was a finalist in the “Collectible of the Year” category at the TOTY Award.

In response to this rapid success for the Num Noms toy line, MGAE has secured over 80 A-list licensing partners worldwide across all major categories of softlines, hardlines, and publishing, creating a scrumptious global licensing program.

Among its NEW global licensing partners are:

HER Accessories (select territories across Europe)