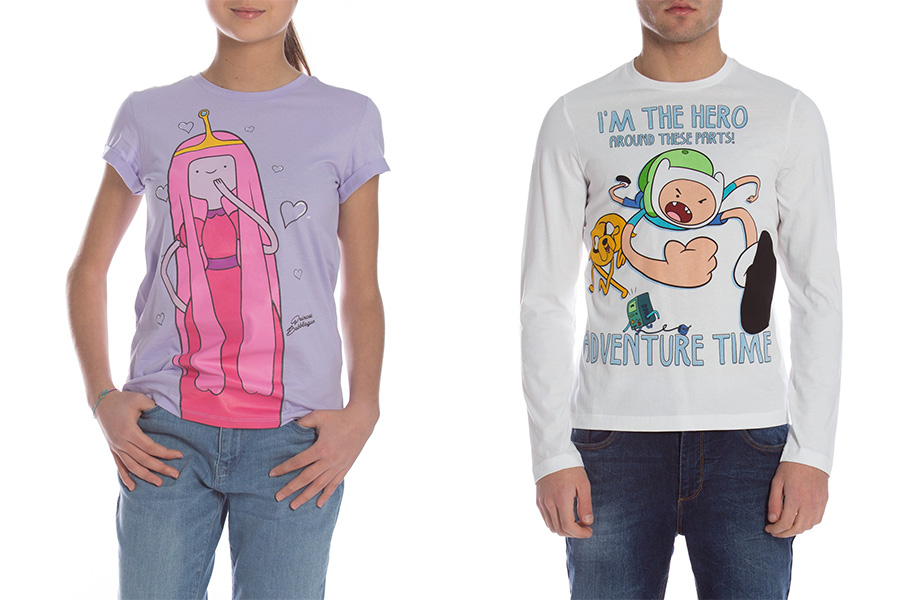 The teenager’s Spring/Summer 2017 collection is available in the brand’s stores.

Turner, a TimeWarner company and owner of the rights to the Italian Sky channels Cartoon Network and Boomerang, and the Digital Terrestrial channels Boing and Cartoonito, in joint-venture with RTI Mediaset – has signed an important licensing agreement for the production and retail of the Adventure Time inspired Spring/Summer 2017 collection throughout branded stores with the casual-meets-sporty clothing brand for children, Original Marines. The multi-award winning cult series is aired only on Cartoon Network (channel 607 on Sky and 350 on Mediaset Premium) and Boing (channel 40 of Digital Terrestrial).

Finn e Jake, the real stars of Adventure Time, are the indisputable protagonists endowed with looks that are inspired by today’s teenagers, both male and female, between the ages of 12 and 16. Captivating and original, the clothing line is characterized by the use of color with iconic graphics that leave an impact, for a cool style that is without a doubt urbanstreet.

Adventure Time – the series created by Pendleton Ward for the Cartoon Network Studios of Burbank, and set in the post apocalyptic magical and surreal world of Ooo, – is a successful brand throughout the world, appreciated by fans of all ages. The show tells the stories of the adventures of Finn, a young explorer, and his best friend and adopted brother, Jake, a dog that has super powers enabling him to grow, get smaller and shapeshift. Other than the show’s great success on the small screen, the series has been nominated at the Annie Awards, the British Academy Children’s Awards, the Critics’ Choice Television Awards, at the Sundance Film Festival Awards, the Teen Choice Awards and at the Primetime Emmy Awards, winning on multiple occasions.

The well awaited 8th season of Adventure Time is set to air from 5th April, Monday-Friday at 18.40, exclusively with Prima TV on Cartoon Network (channel 607 on Sky and 350 with Mediaset Premium). Not to be missed is the special mini-series composed of 8 episodes entitled “Islands”, from 10th April. The event will bring characters on an unforgettable journey. On Free to Air, the Adventure Time appointment is with Boing (channel 40 on Digital Terrestrial) from Monday to Thursday at 16.40.

← ASTERIX AND THE RACE THROUGH ITALY CPLG BRINGS PEANUTS TO ZARA →