Small gift, big smile! It is more than just a catchy phrase. Sanrio, the Japanese brand creator of Hello Kitty, believes that a gift is more than just a simple present as it means expressing heartfelt feelings to others. This is the reason behind the new Hello Kitty partnership with the Italian radio celebrity La Pina to support the project Sos villaggi dei bambini – SOS children’s Villages by #DANCE4AFRICA who have launched the new fundraising campaign to help 500 children and teenage orphans including victims of violence in Swaziland. 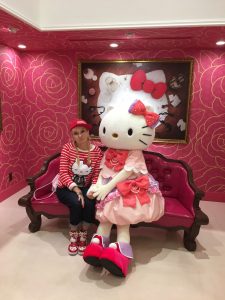 The book published by Vallardi Editore titled “I Love Tokyo” on April 3rd 2017, talks about La Pina’s passion for Japan. With this release there will also be Sanrio-style limited edition merchandise made by One Target SA, the leading company in merchandising production. The collection includes Hello Kitty exclusive plushes by La Pina, two new characters featured in her book “Onigiri” and “Edamame” and a travel set consisting of a bag, eye mask, beauty case, agenda, passport holder and travel mug inspired by Japanese icons and redesigned in Sanrio style. The merchandise will be distributed in selected Mondadori Stores and online on www.ibs.it. Sanrio and One Target will do their part and donate their proceeds to support the campaign.

Among the different promotional activities, La Pina has planned a tour in the major Italian bookstores starting from Milan on Saturday, April 8 at Libreria Rizzoli. On the same evening, La Pina will continue the day with photo shooting activities and DJ sets with Hello Kitty in a popular Milanese club. The tour will continue throughout the month of April and will stop at the Bologna, Naples and Turin Mondadori Stores.