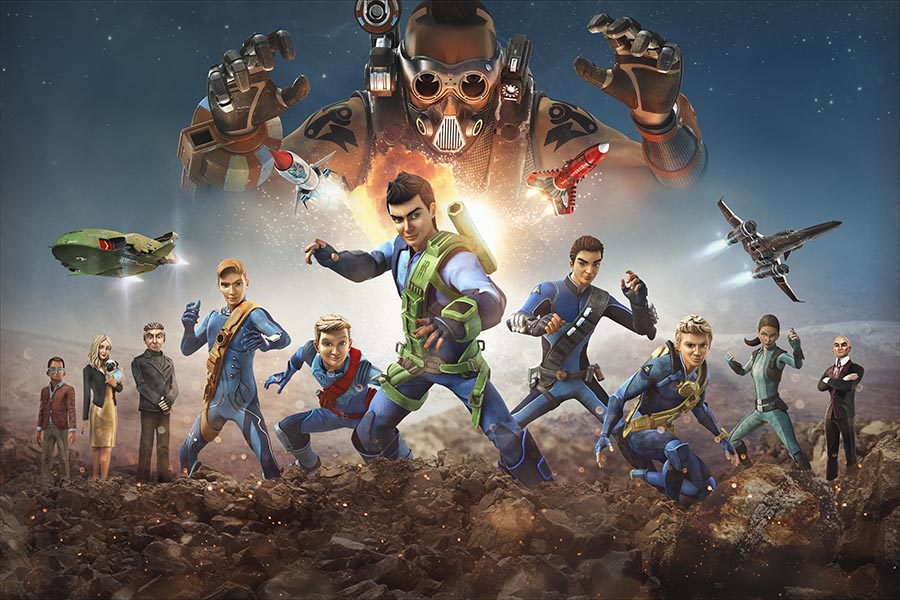 ITV Studios Global Entertainment (ITVS GE) will be heading to the Las Vegas Licensing Expo 2017 with its spectacular portfolio of ITV owned and third party properties.

The hit action TV series Thunderbirds Are Go continues to expand its global footprint and has now been on air in over 40 markets. Recent high-profile collaborations for this popular broadcast include Bernard Matthews turkey nuggets in the shape of the Thunderbird vehicles, and a new range of ‘adventurewear’ for kids with outdoor retailer Regatta. The launch of the mobile game Parker’s Driving Challenge has also been a standout success, reaching in excess of two million downloads within the first few weeks and featuring in Top 5 charts in multiple markets.

ITVS GE are adding another action-packed property to their slate in Robozuna – a Netflix Original animated series in which 14-year-old Ariston and his homemade robot sidekick Mangle attempt to free their oppressed nation from an evil empire. Fans can join forces with Ariston and Mangle when Robozuna debuts on Netflix around the globe in 2018, and in the UK after its premiere on CITV, with licensing opportunities to follow the broadcast.

This year will also see the new interpretation of family favourite Watership Down. The four-part CGI animated mini-series is a reimagining of Richard Adams’ classic 1972 novel and a co-production between the BBC and Netflix. The series will feature the vocal talents of James McAvoy, John Boyega, Sir Ben Kingsley, Olivia Colman, Nicholas Hoult, Miles Jupp, Freddie Fox, Anne-Marie Duff and Gemma Arterton, and will be written by Bafta-nominated Tom Bidwell. ITVS GE will be talking to licensees about exciting licensing opportunities for the series.

ITVS GE will also showcase opportunities for the ever-popular Supermarionation brands created by Gerry Anderson, including the original Thunderbirds as well as Stingray, Fireball XL5, and Captain Scarlet, which celebrates its 50th anniversary this year and for which ITVS GE will be launching a range of new limited edition anniversary products. Thunderbirds has recently been in the UK media due to the starring roles of Parker and Lady Penelope in a major marketing and TVC campaign for Halifax bank. The TV ad premiered during Ant & Dec’s Saturday Night Takeaway on ITV on 25th March to 6 million UK viewers, and the campaign continues in branch, online and with posters at over 1700 sites around the country.

The ITVS GE team will also be showcasing British drama series such as Poldark and Victoria, following standout ratings success in multiple territories. In addition to this, ITVS GE is a full-service licensing agent proud of its UK roster of third party brands including Oddbods, Super 4 and Village People.