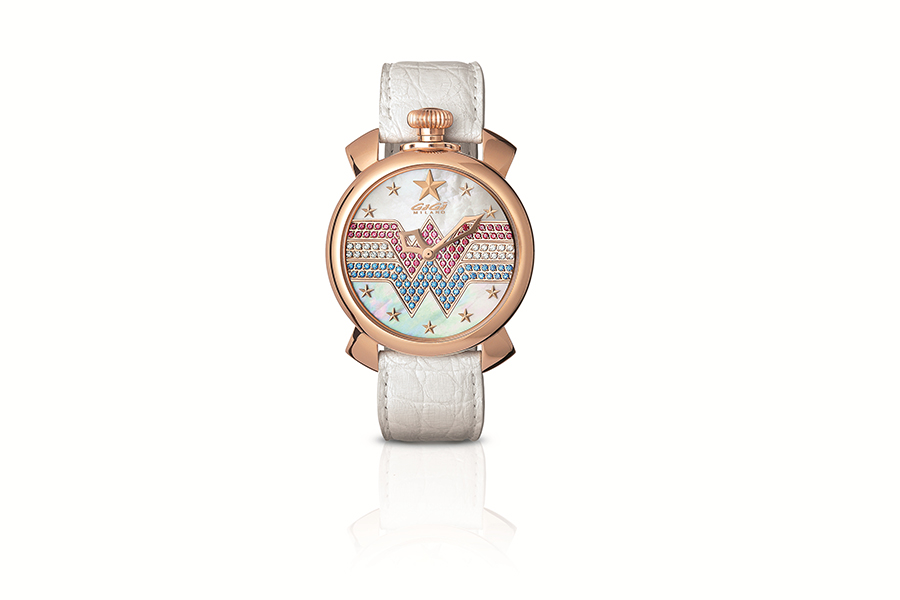 A limited edition watch dedicated to the DC Comics superheroine.

75 year ago, William Moulton Marston created the mythic Wonder Woman, a superheroine that would go on to be the most iconic of our time, inspiring the idea of Girl Power and serving as a beacon of wisdom, strength and equality; setting an example for females.

To celebrate this important anniversary, GaGà Milano has dedicated an “anniversary” watch to the DC superheroine; a limited edition of 175 pieces.

Powered by Swiss Made Quartz movement, the Manual 40MM Wonder Woman 75th Anniversary watch has been created with a rose gold plated case and Italian handmade leather strap. The unmistakable colour combination of the American flag has been reproduced with stones than create the famous logo on the watch’s face in Mother of Pearl. The hands are made of small rose gold stars that symbolize the princess role of Wonder Woman.

The Manual 40MM Wonder Woman 75th Anniversary watch comes inside an original case of true GaGà Milano style. Made in white painted wood, endowed with the Wonder Woman icon, which is also featured on the inside of the case on a golden plaque. The case comes inside a classic white box, personalized with a Wonder Woman comic strip.

Future collaborations between GaGà Milano and Warner Bros. Consumer Products include projects that are dedicated to other DC superheroes such as Batman and Superman.

The exclusive Manual 40MM Wonder Woman 75th Anniversary watch, previewed at Baselworld 2017, will be available in GaGà Milano Boutiques and resellers from April.