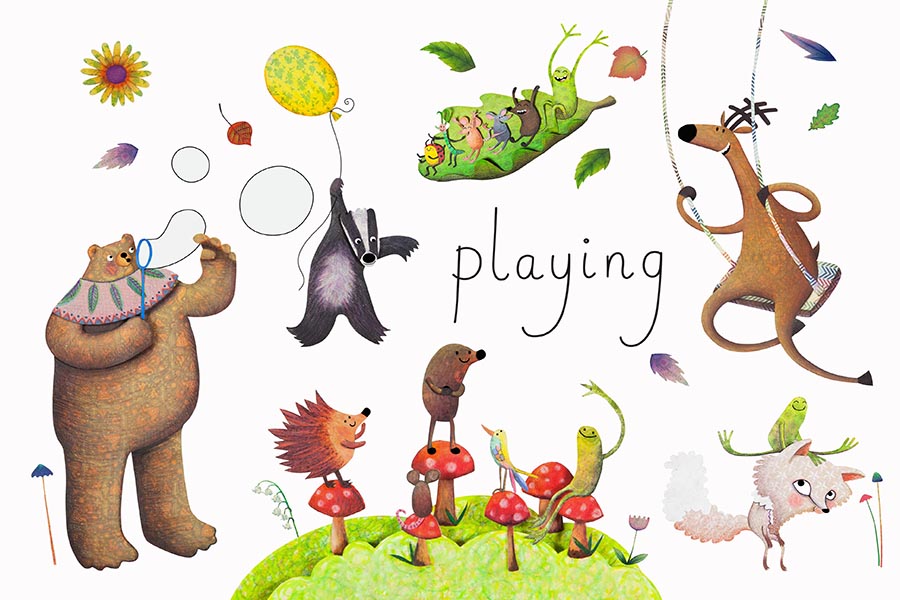 The early learning concepts feature original and quirky renditions of classic 0-3 themes, such as colours, activities, numbers, learning, and ABC’s, using the beauty and humour of Jo’s unique animals to engage both parent and child. The pages show an imaginative and charming array of characters and objects to look at, in a layout which is visually stimulating and  reminiscent of Richard Scarry.

Expect to see some favourite characters like Rowan Fox, Barley-Crumb Badger, lots of frogs and bunnies, as well as a whole new set of friends including a mole, panda, squirrel, pony, caterpillar, wolf…and even an Arctic Fox!

“Jo’s new illustrations and designs take an evergreen genre and make it distinctly her own. Her style is imaginative and eclectic, standing out amongst a very creative crowd, bringing a genuinely fresh and unparalleled style to the book shelf,” commented Ingrid Selberg. “The popularity of Jo’s designs in other product categories shows how irresistible her artwork is – and will be in picture books as well.”

Illustrator Jo Rose added, “Every curious kid starts off his or her reading journey with lovely early learning books – which often get read over and over (and over!) again.  As a parent and artist, I want to create characters that help children fall in love with the fun and adventure of books and learning – and entertain their parents as well. Especially on the 50th read!”

Jo is well known for her instantly recognizable designs which are painstakingly handcrafted using a blend of illustration, cut-outs, 3D sets, and photography. Drawing on a love of Scandinavian folklore and the inspiration of the New Forest where she lives, Jo created her enigmatic world inhabited by a myriad of adorable characters with distinct, funny and endearing personalities.

Jo turned her vision of Deer Little Forest into a brand which is now represented by licensing agents in 27 countries. The style is ideally suited to baby & mummy categories – with publishing being a natural fit for this demographic – while a vast greeting card range sold at Harrods, Paperchase, Liberty’s, John Lewis and beyond attest to the charm and appeal of the illustrations.

The debut of the DEER LITTLE FOREST books at Bologna Book Fair follows the successful launch of the brand in Asia at the Hong Kong Licensing Show in January with Empire Multimedia, and the Moscow Licensing Show in February with The Icon Company.