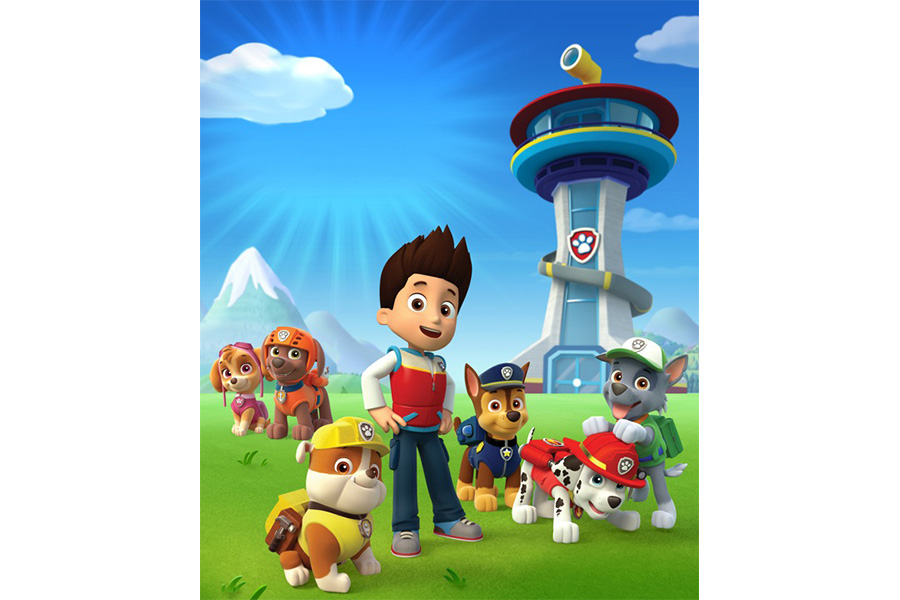 The Bologna Licensing Trade Fair starts Monday the 3rd of April, the most important exhibition fair in Europe, where the main licensees and licensing companies exhibit the latest news on the licensing market, from entertainment to brands, fashion and sport. Once again the Italian Consumer Products team at Viacom International Media Networks Italia, guided by Nadia Caron, are set to be present with a large licensing stand, situated at Pad. 31 stand A/8, dedicated to the Consumer Products news and the Viacom properties that are in line with the event.

The Viacom International Media Networks Italia Consumer Products team was also awarded the Bologna Licensing Award, a first time award in Italy for BolognaFiere, for the revolutionary property of the year 2015-2016: Paw Patrol.

“We are honored to receive this important award that we have gained thanks to the optimum results that the Paw Patrol brand has obtained in partnership with Spin Master. We climbed to success with the television series, that is aired on the NickJr channel (Sky 603-604 in Italy), putting forth the energy and genuinity of the property to young and old consumers through products that have been studied, targeted and developed together with our partners. Italy is considered one of the most strategic countries for our company, both in terms of development and objectives, but also thanks to the wonderful support obtained, such as this award!” exclaims Nadia Caron, Senior Licensing Director for Viacom International Media Networks Italia.

The Viacom International Media Networks Italia stand presents two important pieces of news this year, the newly launched property “Nella the Princess Knight” and “Rusty Rivets”, that will fill out the precious portfolio of properties.

“Rusty Rivets”, preschool series that was launched in January 2017 on NickJr, Sky 603-604, shows Rusty as protagonist; a young inventor and designer of 10 years of age who loves to experiment with technology and mechanics with his best friend, a robot dinosaur, to construct new objects. For this brand, an important collaboration was consolidated with Spin Master. Already at the top in terms of viewings and enjoyment, the series has all of the predispositions to become a phenomenon. The launch of the product is predicted for 2018.

“Nella the Princess Knight”, is the first princess to enter into the world of Viacom, contemporary and valorous, a little girl of 8 years of age who loves princess dresses singing and dancing and much more! She is also a knight apprentice who lives fantastic adventures with her unicorn, Trinket. The series has already enjoyed surprising results from the US launch, in Italy is is set to air on NickJr from June 2017. The Consumer Product launch will be important over all categories.

Moreover, amongst the BLTF stands, the well loves “Paw Patrol” will not be amiss, especially seen as they will be receiving the “Bologna Licensing Award”, a gem on the portfolio of Viacom and a key preschool property with cross category developments both on the girl’s and boy’s markets. The success of the series zooms in with more successes that are obtained from foreign markets, such as the 17th edition of the “Annual Toy of the Year Awards”, the Toy Industry Association has also conferred the “Best Toys and Games of the Year” and “License of the Year” (Spin Master- Master Toy). Paw Patrol is reconfirmed as Top Show on NickJr and FTA for the 4-7 year old’s target. Moreover, on NickJr +1 (Sky 604), the Paw Patrol Pop Up Channel will be available from 8th to 14th May, seven days of 24 hour programming featuring some brand new episodes that have never before been aired.

The last piece of news for Viacom is “Shimmer & Shine” aimed at a female target, already airing with NickJr and set to be on FTA from October 2017. The development programme is set to be supported by the arrival of the third season, aired between September-October 2017 on NickJr (Sky 603-604). Also airing on FTA.

The “Blaze and the Mega Machines” property that is dedicated to boys, sees 2017 news of the third season that is set to air in March on NickJr (Sky 603-604), as the first episodes see luminous cars ready to excite: in the new adventures, Blaze, AJ and all of their friends race in a special night time competition. In the second part of the episodes, predicted between September and October 2017, a brand new scenario hits the screen: an incredible island where our friends transform into talking animal-cars. On air on FTA, the show is positioned in the top rankings and the 4th season is already in production.

“SpongeBob” is amongst the evergreen properties for Nickelodeon, loved by children and adults alike. May is Spongebob month on Nickelodeon, Sky 605-606, and the 200th episode is arriving! Nickelodeon celebrates the yellow ocean sponge in style, and the Back to School 2017 range is also ready. Currently with FTA, the episodes are on rotation of all of the old episodes, and the 10th season is in production.

“Teenage Mutant Ninja Turtles” (on air with Nickelodeon Sky 605-606) was still the #3 property amongst Action Figures (NPD Data) at the end of 2016. Key product on Nickelodeon with a profile that is concentrated on the boys target. The 4th season has just begun airing and collects together all of the key elements that are loved by children: a new world, intergalactic enemies, new mutants and vehicles. With Back To School 2017 the 5th season is airing on NickJr. On FTA the property is airing with episodes on rotation from various seasons.

Inside the stand, important evidence from the Publishing sector can be found. Regarding Italy, the division is working with the most part of the best-in-class of this segment: Centauria, Panini, Gedis, Edicart and Rizzoli.