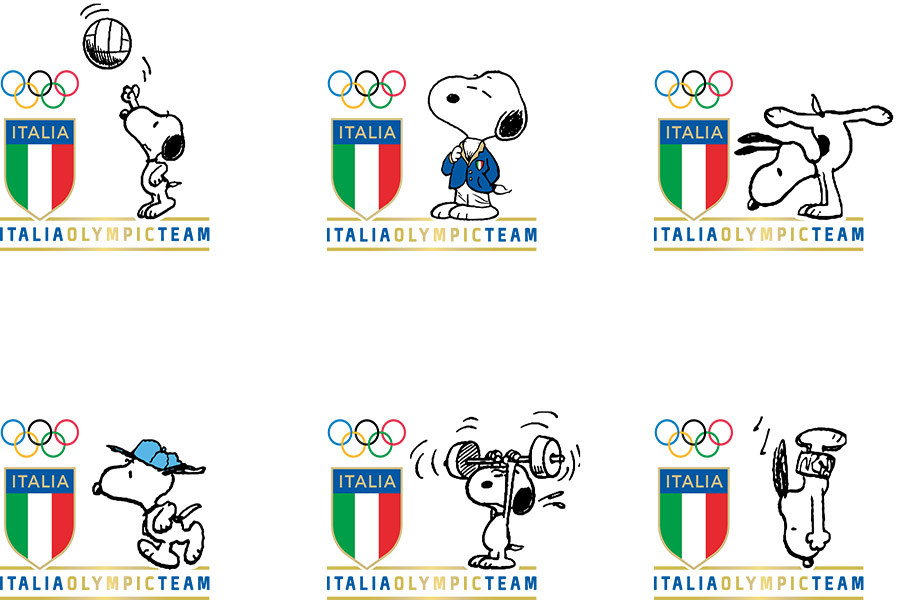 Team Italia has another athlete in the team!

Today a new travel buddy has been made part of the Italian Olympic team: Snoopy is kitted out in blue!

The idea came from the wish to create an original and innovative licensing activity, running the Italia Coni Brand side by side with the image of a transversal testimonial with rooted values that are coherent with those of sport on all levels, amplifying positive messages and a communication tool that is both useful and social.

Coni, through a licensing agreement of co-branding, unique in its genre, is set to develop and implement a licensing project in Italy that foresees Snoopy taking part in all of the Olympic games for the first time, kitted out for Team Italy.

The program will cover various merchandising areas: from the world of games, with peluches and educational toys of a sporting theme, to the world of school, with accessories, services and much more to create an important flow of communication and interest.

Charles Schulz was a sporting man and his great passion was ice hockey, but his interest in all disciplines of sport, from the typical American to the Olympics, conditioned his style and pushed him to confront one of the most important and delicate themes in growth: sport and the “dream” of the competition.

Amongst all of the Peanuts characters, though, one in particular grasps this emotion: Snoopy!  Snoopy, just like all of us, deep down…., is convinced that he is an unreachable champion, as he tells, or better yet- dreams, of training for his Olympic events. It doesn’t matter which events: he is always ready for competition!

For this reason, it couldn’t not be him as the main character of the series of projects and activities that are aimed at spreading sport of all levels, in particular to the young and even younger, to promote the culture of sport as a model of social values.

The philosophy that Schulz tells the tale of in his memorable comic strip where Charlie Brown, on his own in the middle of the field, exclaims: “the way in which a person acts on the field is the way in which he acts in life!”

The project was created by Brand for Business srl (B4B) for Coni and Coni Servizi. B4B also manages the commercial implementation in Italy with the precious collaboration of Bic srl, Italian agent for Peanuts.

At Bologna Licensing Trade Fair, Coni and Peanuts Worldwide will present a new and unique initiative in the world of licensing: Tuesday, 4 April from 01.00 pm to 02.00 pm, Andrea Lucchetta of Coni (Coni Italian Team Ambassador) and Peanuts Worldwide will present at the Bic stand (Hall 31 A2) an innovative co-branding project that connects sports and the world of characters. The project, unique in the world of its kind, was conceived by Brand for Business srl (B4B) for Coni and Coni Servizi. B4B also manages the commercial implementation of the project in Italy, in collaboration with Bic srl, Italian agent for Peanuts.