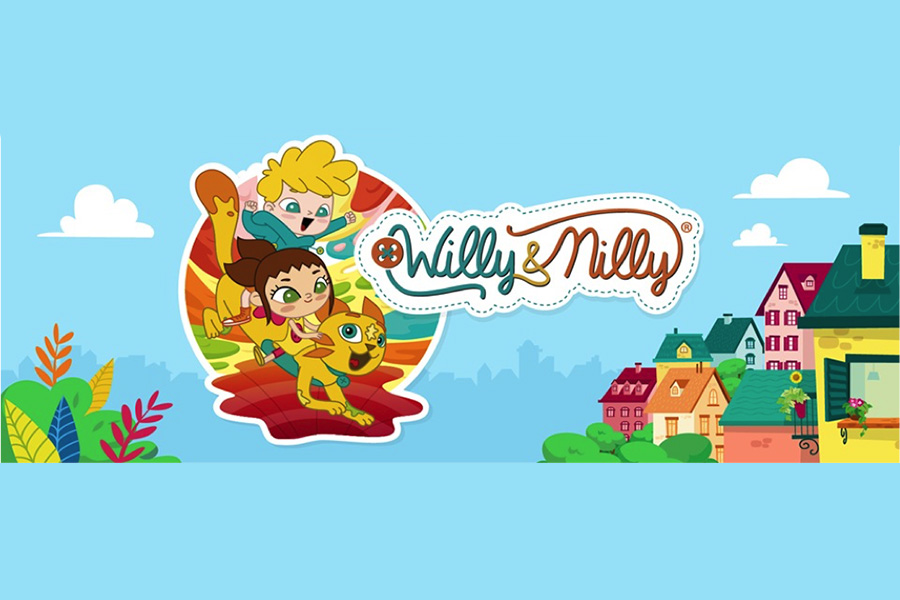 Much more than an ordinary t-shirt: Willy & Nilly launches a new concept in kids-wear, an eclectic product in between apparel, creative play and narrative universe.

Above all, the t-shirt is the first of many supports to enter the magical Stainland of Willy & Nilly and discover that stains are not always to be scolded.

We like to define it as the newest way of thinking the (Baby) Dress-Telling. Every t-shirt tells a story and can create new ones, but every story holds one common message: getting stained and dirty is not a mistake, a failure or an error because it’s part of the discovery and the creation of something personal.

THE PRODUCT – The Willy & Nilly t-shirts are high-quality products with natural colors resistant to washing and high-temperature. The t-shirts are much more than just items of clothing as they offer something more important than simple decoration. They give the kids the opportunity to wear customized garments that have their own story. Starting from a given narrative concept, they can create on every t-shirt a new and always different adventure conceived and imagined thanks to their fantasy. The packaging format is a “book” to highlight the narrative-literary orientation of the product. Every package includes, besides the t-shirt, a story and eight spotties. Three-in-one product: clothing, a creative game and a story to be told. On every t-shirt the kid can attach four spotties that will become part of the story to be invented. These can be detached and reused again for another new game. Because of the number and interchangeability of the spotties, they can be attached to create stories and different plots or can be traded as cards. The Willy & Nilly line offers an unparalleled and traditional support like that of a t-shirt that can be reinvented with characters and objects as if it were an app. The aim is to create many different stories that will also get the parents involved in the process. The contents are thus richer than simple stories limiting to deliver a useful message to the child. They are also more personal because they suggest interpretations that can be analyzed differently according to age, social contest and the child’s competences.

THE CONCEPT – Getting stained means interacting with the world! The main characters of the stories are Willy, a blonde shy kid who becomes very brave when needs be, and his little friend Nilly, more lively and always ready to jump into new adventures. The two friends spend lot of time together playing and discovering the world around them. They mess up in the kitchen or scribble with their markers and… inevitably they create stains! But their cat Spot has the extraordinary power of turning into a magical Spotpard and take them, through the stain, to Stainland, a parallel universe where the two friends live incredible adventures. A tomato stain becomes a poppy field where a precious treasure is hidden, an ink doodle turns into an abyss to be probed on board of a submarine, mud stains become deserts to be crossed on the hunchback of a camel, juice drops a constellation to explore on a space shuttle…Not every stain is a portal for Stainland, just some that are sniffed by Spotpard and that are called Spotties. The Spotties are different from the other stains because they are not the result of a clumsy try, of an error or of an accident, but they are the consequence of a very peculiar action: they are necessary stains. They are the “medals” of the stains for brave deeds. They are the “signs” of the stains for artistic deeds. They are the “scars” of the stains for battle deeds. They are “pictures” of the stains for travelling and exploration deeds. The antagonist of the two main characters is the Nanny, the fearsome babysitter that is often called to keep an eye on the kids: very tidy and enemy of the dirt, she is the most meticulous person on earth. She has a set of rules to follow and, it goes without saying, she hates stains. For this she wanders around the house armed with her rag to delete every trace of dirt that she encounters. The Nanny’s rag is a magical object very dangerous for the Spotties because it can deactivate their power with a single sweep. But the two children, with the help of the magical Spotpard, are always able to gain the upper hand. In Willy & Nilly’s world the chosen approach is that of the layered episodes, which means that every single adventure has the same structure. In the transmedia storytelling the narrative point of view holds a new and richer significance. The subjectivity doesn’t remain limited to a single point of view but it is fragmented to give a many-sided perspective to the story. The message is easily comprehensible: stains should not be demonized when they are the consequence of discovering the world. This helps the kids become aware that getting stained can be fun, if one “gets stained” when she or he is trying out new skills, from game to handicrafts or messing up in the kitchen. Every activity can stimulate the kid’s learning. Willy & Nilly stand by creative parents that don’t get mad if the kid gets dirty but encourage her or his imagination and make up stories about the stains. As our characters teach us, every stain can open the door of the imagination towards new universes.

THE FORMAT – The interactive t-shirt is the first support through which one can enter Willy & Nilly’s adventures and the magical world of Stainland: characters and narrative structure have been expressly studied to be immediately recognizable and transferred to other supports.