Xilam, the award-winning animation production company, announces it has had a year of success for its evergreen brand Oggy and the Cockroaches.

With high worldwide viewing ratings and exciting new licensing activity, the brand Oggy and the Cockroaches continues to grow into 2017 with season 5 which is due to air with key broadcasters such as K2/Frisbee in Italy, Gulli/Canal J in France, Cartoon Network Asia, Latin America and Africa during the peak back to school period.

In season 5 (78 x 7’), the battle goes on between Oggy and the roaches as they travel back in time through the ages and meet icons such as Caesar, Leonardo da Vinci and the Cyclops, as well as rocketing forward into the year 3000. Seasons 6 and 7 (156 x 7’) will comprise a mix of brand new episodes along with full remakes of classic stories from seasons 1 and 2, all produced in 4K. After almost 20 years of success, this spectacular addition of 234 new episodes, all produced in 4K, will project the brand in the next 15 years, as it will keep entertaining the children and their parents with them.

To support the new series, licensees will have a brand-new style guide addendum to work with, which allows new designs, styling and will lead to fun and broader international consumer products offering. This addendum will showcase Oggy and friends costumed in the style of each period they visit such as Medieval China, Ancient Rome, Ancient Egypt and la Renaissance.

“The outstanding new seasons to come along with our strong broadcast partner across the globe will certainly set the ground of an exciting time for our licensing partners. Oggy through the age will offer limitless product extensions and I trust that we will please and surprise our little fans needs with fun and crazy Oggy products.”

Discovery licensing team along with Xilam have secured several exciting partnerships to date including new collectible figurines for its flagship brand Oggy with leading Italian collectible flow pack producer, Grani & Partner, the line is distributed by Gedis Newsstand in Italy.

The Oggy & the Cockroaches first two waves of collectibles have proven to be very popular, and further collections are currently in development, this demonstrates the popularity of not only the TV series in Italy, which broadcasts on both K2 (channel 41) and Frisbee (channel 44), but also the consumer products range which continues to grow across all major categories, including toys. The collectibles, which are bright, colourful and cheeky play to the entertaining and crazy characteristics of the Oggy brand.

Marie-Laure Marchand, Senior Vice President of Global Licensing at Xilam added: “Grani and Gedis are wonderful partners for us to work with; they have now released two waves of high quality 3D figurines and are already working on further fun and innovative items which will perfectly suit the brand attributes. This is a great Oggy licensing success story and I trust that Italian children will continue to enjoy playing with the characters.” 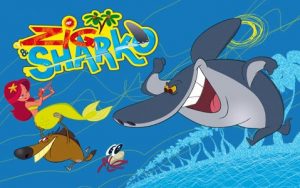 Xilam are continuing to see the growth and success of its comedy children’s property Zig and Sharko, with outstanding viewer ratings on leading broadcast platforms worldwide. Gulli in France has seen it become one of the highest rated series on the channel. It was also rated the top show during BTS 15 (source Gulli PR 2015/16) as well as being one of the most viewed shows on Gulli Replay with 14.1 million views

In Germany, Super RTL has broadcast Zig and Sharko daily in primetime slots since January 2016 and season two has achieved up to 40% market share of children aged 3-14 years (source Eurodata TV).

Meanwhile in South East Asia the series, which broadcasts on Disney Channel, is also reaping rewards and leading the way with strong ratings amongst 5-14 year olds’ (source AGB Nielsen).

The fun and zany cartoon, Zig and Sharko, collaborated with the Paris Aquarium is ‘how to create a cartoon series’ exhibition attracting families for a fun filled day out. The event has a variety of different workshops to get involved in such as Puzzles, Colouring areas, Treasure Hunts and Face painting. Zig and Sharko episodes will also be airing throughout the event show in the aquarium. The Paris Aquarium which has seen an impressive 600,000 visitors per year and will be supported by strong marketing initiatives such as poster campaigns on the Parisian buses and targeted newsletter distribution which started in January and is currently running until March.

Zig lives on a desert island but is starving and has just one obsession: to devour the delicious mermaid who lives in the lagoon. But sadly, for Zig her best friend is Sharko, a shark with plenty of muscle who somehow manages to sabotage the hyena’s every move. Due to the nature of the animation being based on a beach Xilam’s licensing team are actively on the search for potential seasonal and outdoor licensees. 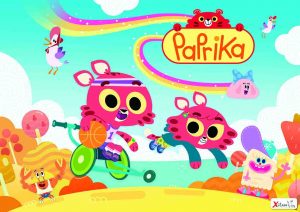 The new pre-school animated comedy series, Paprika, offers unique storylines following the lives of adventurous twins, Olivia and Stan Paprika. The series has been commissioned by France Télévisions which will launch in November on FR5 followed by Disney junior (EMEA) in Spring 18. The bright and colourful series is currently in production at Xilam’s own studios in Paris and Lyon and will consist of 78×7′ (26 half-hours) episodes.

2017 will be a very important year for Xilam as we are re-launching our flagship property, Oggy & the Cockroaches with 3 new seasons to be aired on Gulli as of September 2017. Gulli as well as Canal J have committed to the whole Oggy series i-e 351X7’ and this will set the ground for an important media and licensing plan. We will also be showcasing Paprika, our first preschool comedy which will debut on FR5 in November followed by Disney Jr.

We will also introduce the Zig & Sharko brand for the first time in France. The 156X7’ slapstick comedy is currently aired on Gulli with massive rating success and more than 14 million downloads on Gulli Replay alone.

We will exhibit at Kazachok to meet French licensees to discuss potential business opportunities in the coming years as we will make direct deals in this territory and won’t use a local agent.

We are looking for partners in all major key categories, toys and games, publishing, BTS, apparel and promotion. Oggy would fit perfectly for promotion, whether it is QSR, product or loyalty promotion as it target’s a 6-10-year-old gender neutral audience and is an endearing character that is known and loved by millions of fans already.

Oggy and the cockroaches as well as PAPRIKA.

We have high expectations for the French market which is Oggy’s home territory, with long term plans which will see Oggy returning to Gulli. We are looking to build strong partnerships with a master toy partner and also planning to appoint a master publisher.  Depending on the categories, the product will launch Q4 17/18. As far as Paprika is concerned, we will be looking for a master toy partner as well as a publisher as a starting point.