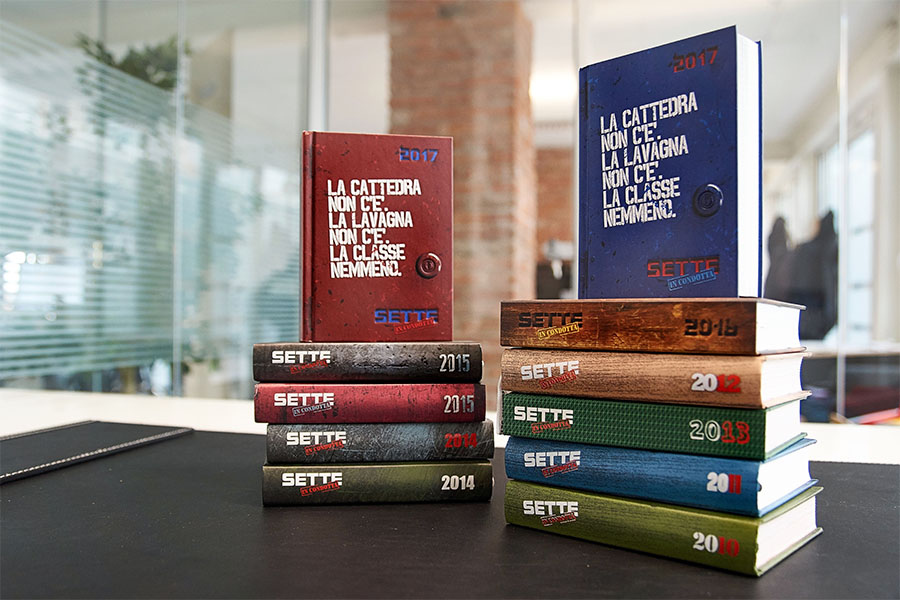 Tags from the story: ScuolaZoo, SETTE in condotta.

ScuolaZoo amplifies their profile for Generation Z, thanks to increased penetration from SETTE in Condotta for the target of students that are two years into high school.

New synergies in the world of school publishing: at the threshold of their 10th anniversaries, both ScuolaZoo and SETTE in Condotta, the two diaries, respectively the third and fifth best sellers in Italy, begin their new journey today under the hat of the Business Factory OneDay Group, already home of ScuolaZoo.

The founder of SETTE in Condotta, Giovanni Cecolin alias John Beer, surrendered the quotes of the publishing brand to ScuolaZoo to dedicate himself to his new creation: the communication business YAK. The diary, which is about 75.000 copies strong for Generazion Z, those born after the millennium. ScuolaZoo, with their 200.000 copies sold, is more sought after by three year students, traditionally Millennials that only see the first children of GenerationZ in the third year of high school. The 275.000 total copies sold indicate that 1 branded diary in 7 that is sold in Italy (each year 2 million copies are sold) will be either ScuolaZoo or SETTE in Condotta.

ScuolaZoo has already changes the layout of their Internet site at ScuolaZoo.com to move closer to the GenerationZ’s demand for usability that is more organized and immediate, to navigate almost exclusively from a mobile device. The partnership with a historical papermaking brand such as SETTE in Condotta, which has the tradition of focussing on a target that is slightly younger, remakes the brand to reach the “Z” community.

Giovanni Cecolin, creative father of the diary, founded a blog in 2006 in Padova, Notadisciplinare.it:a blog dedicated to the sharing of tragicomic school tests and credible disciplinary notes. It has been classified as the second most influential blog in Italy after that of Beppe Grillo and the media push favourites the edition of the first book that comes from an online blog: Rizzoli publishes “La classe fa la ola mentre spiego” (The class says “ola” while I explain), that immediately became a bestseller with 15 editions.

Another 6 books follow (240.000 copies) with Rizzoli and 11 academic diaries published by Panini, selling 75.000 copies each year. The brand confirms itself in papermaking, developing not only diaries but other products for school use, exercise books and gatherers, landing in 2013 also in the GDO.

Similar stories for ScuolaZoo, creation by Paolo De Nadai and Francesco Nazari Fusetti, who are also from Padova. Paolo’s idea was born by him posting a photo of one of their teachers who fell asleep during an exam on their blog for Students of Padova. The photo went viral and was featured on the national news. The blog, from being local, quickly became a national voice for all Italian students, their favourite classmate who is able to entertain and inform them, with a mix-up of activities that are a little “school” and a little “zoo” in their language. The success brought the publishing of two books that were published by Mondadori, 9 school diaries, various innovative products of papermaking, a tv series aired on Mediaset and the famous Viaggi Evento, that since 2007 has been regulating the experience of the high school diploma holiday for 45.000 teenagers, and today over 10.000 teens are involved each year, not to mention the R.I.S. project- Representatives of the ScuolaZoo Institute, that holds the goal of creating a better school, beginning with the suggestions and direct involvement of students.

“I am proud to have given life to Sette in Condotta, to have had the possibility to see the idea evolve and to have seen it reach extraordinary heights – declares Giovanni Cecolin -Now that it has become bigger and it can work with ScuolaZoo, I can totally dedicate myself to my activity: YAK, the international communication company that specialises in sports/events and product/retail. I will take all of the abilities that I have gained over these years along with me, putting all of my creativity to our clients along with the digital and publishing capacity of my team. With the same enthusiasm of 10 years ago, but with much more experience”.

“Giovanni’s story together with mine seems as if we are on two roads that are very similar. It was only a matter of time before we crossed paths, both from Padova and 10 years into our projects” Comments Paolo De Nadai, Founder of ScuolaZoo and CEO of OneDay Group. “ScuolaZoo is a projects that was born in the digital world, becoming the largest community of Italian students, expressing itself through schools, thanks to the diary. With SETTE in Condotta, we are refining our technical engagement with GenerationZ, but at the same time we are taking our digital know-how along for the ride, bringing together a community of reference to social media, to trigger the automatic mechanism in which the digital and the real worlds collide. ScuolaZoo’s success is thanks to this”.