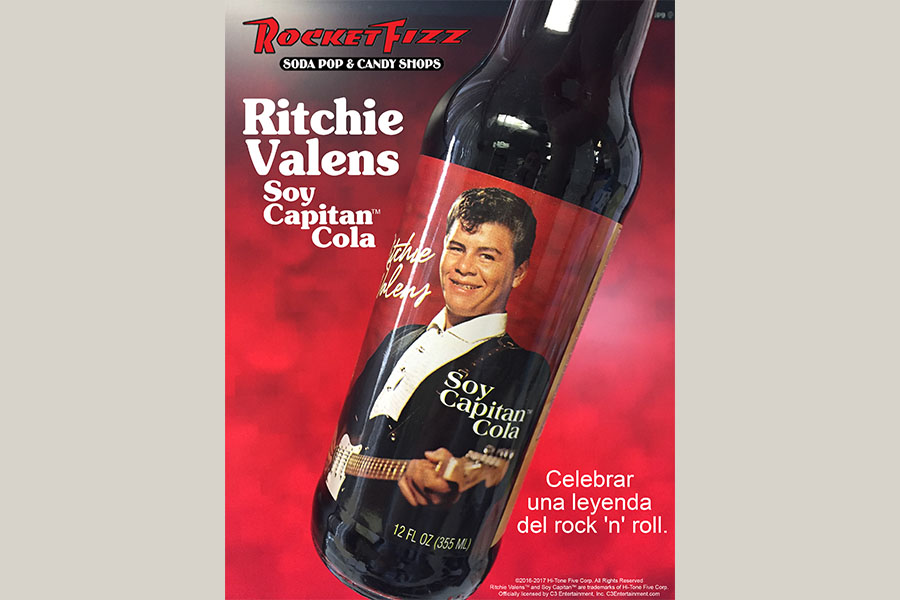 C3 Entertainment, Inc. is excited to announce a license with Rocket Fizz Soda Pop and Candy Shops to produce a Ritchie Valens soft drink called Soy CapitanTM Cola for sale in all Rocket Fizz stores and other select outlets. http://rocketfizz.com/ritchie-valens-soy-capitan-cola/

In stores now, you can enjoy a bottle of Ritchie Valens’ Soy CapitanTM Cola around the country in 28 states and over 120 locations. The bottle features classic imagery of Ritchie Valens with one of his electric guitars.

According to the Valens family, cola was Ritchie’s favorite soft drink flavor. He could often be found sipping a cola with friends at the popular Southern California diner, Bob’s Big Boy.

Ritchie Valens rose to fame in the late 1950s as the first Latino rock star and a pioneer of rock ’n’ roll with hits such as “Come On, Let’s Go” and “Donna.” The lyrics from his iconic version of “La Bamba,” which fused elements of a traditional Mexican folk tune with rock ’n’ roll, inspired the name of the soft drink – “Yo no soy marinero, soy capitan…”

“Ritchie Valens is a legendary artist who still resonates today,” said Ani Khachoian, Executive Vice President of Licensing, Merchandising and Distribution for C3. “Rocket Fizz and its nostalgia-packed stores are the perfect place for old and new fans to celebrate the legacy of Ritchie Valens.”

“We are thrilled and honored to be bottling this collectible cola. As a true rock ’n’ roll icon, Valens is a natural fit for our stores,” said Robert Powells, President and Co-Founder of the Rocket Fizz Soda Pop and Candy Shops.