The famous Cool Maker line sewing machine by Spin Master is remade with a new look and functions. The new tiffany blue SEW COOL has a draw to keep accessories in order and has much more potential than ever before. It can be used, not only with the special textiles of the old version, similar to felt, but also with new materials; a material that is very similar to tulle comes with this machine, glittery and super fashionable. This machine is also a pom-pom maker with its integrated apparatus that gives children the possibility to make pom-poms to add to their own creations.

Amongst the news for the famous construction line, Meccano, is the new faster-than-ever motored Multi-model of 25 off-road vehicle  that comes with 4 wheels and real working suspension. 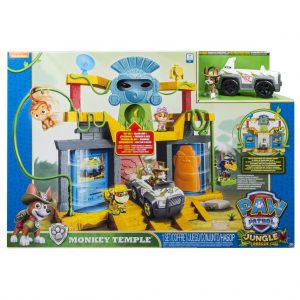 On Cartoonito from October 2017, the new episodes of the third series of Paw Patrol will be shown, inspired by a new theme: the jungle. Spin Master is therefore launching a new playset, MONKEY TEMPLE, that recreated the jungle environment and transforms into the command centre, ready for action. Inside the playset, the new character Traker can be found, with his vehicle, and other animals (a monkey and a snake). Debuting also is the new PAW TERRAIN, an off-road vehicle made with a working gru that includes the character Ryder, the jungle, and two animals.