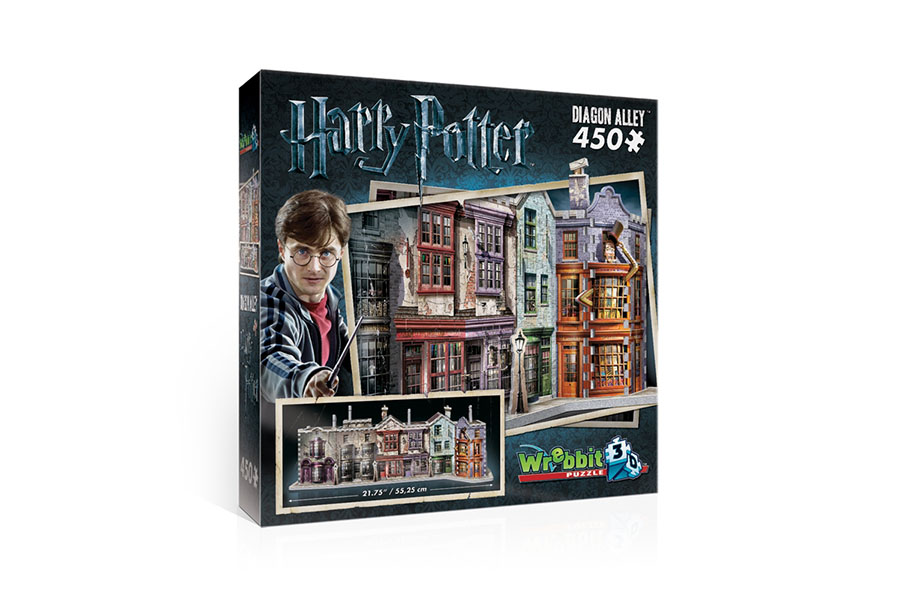 One of the most iconic landmarks from the HARRY POTTER™ film series has been brought to life in 3D puzzle form, thanks to a partnership between Wrebbit Puzzles Inc. and Warner Bros. Consumer Products. Fans of Harry Potter can now build their very own Hogwarts School of Witchcraft and Wizardry in 3D puzzle format!

For Nuremberg Spielwarenmesse 2017, Wrebbit is pleased to offer a wider range of puzzles from J.K. Rowling’s Wizarding World, in the wake of last year’s global blockbuster FANTASTIC BEASTS AND WHERE TO FIND THEM, which takes us to a new era of the Wizarding World, decades before Harry Potter and half a world away.

The collection, which focuses on famous sections of Hogwarts Castle, initially launched with the 850-piece Great Hall.  In early 2016, Wrebbit added a second model, with the 875-piece Astronomy Tower. When combined, these two puzzles create a stunning 1725-piece 3D display from the Harry Potter universe.

The collection continues to celebrate the magic of J.K. Rowling’s Wizarding World with the Wrebbit3D™ Hogwarts™ Express, a 460-piece puzzle, and Diagon Alley, a 425-piece puzzle.

A series of 2D 500-piece poster puzzles was launched for both the HARRY POTTER™ and FANTASTIC BEASTS AND WHERE TO FIND THEM™licenses.  Exclusive to Wrebbit, these foam-backed puzzles are converted into actual posters of favourite characters from J.K. Rowling’s Wizarding World™ that can be lifted and pinned on a wall, as suggested by the puzzle series’ trademark slogan, “From table to wall without glue!™”

On January 24, 2017, the British Toy & Hobby Association (BTHA) awarded their highest recognition in the Puzzle Category – the Toy Fair’s Best New Toys 2017 Award – to WREBBIT’s poster puzzles inspired by FANTASTIC BEASTS AND WHERE TO FIND THEM.

In making the announcement, Jean Théberge, president of Wrebbit Puzzles Inc., declared, “Teaming up with Warner Bros. Consumer Products to create puzzles inspired by the HARRY POTTER films and FANTASTIC BEASTS AND WHERE TO FIND THEM enabled us to bring this magical world to the international market and add to our incredible momentum.  We continue to focus our efforts and energy on satisfying fans of home-based entertainment looking for an opportunity to share some quality and good times with others.  The recent Best New Toys award from the BTHA for our FANTASTIC BEASTS AND WHERE TO FIND THEM poster puzzles served to validate all that hard work.”