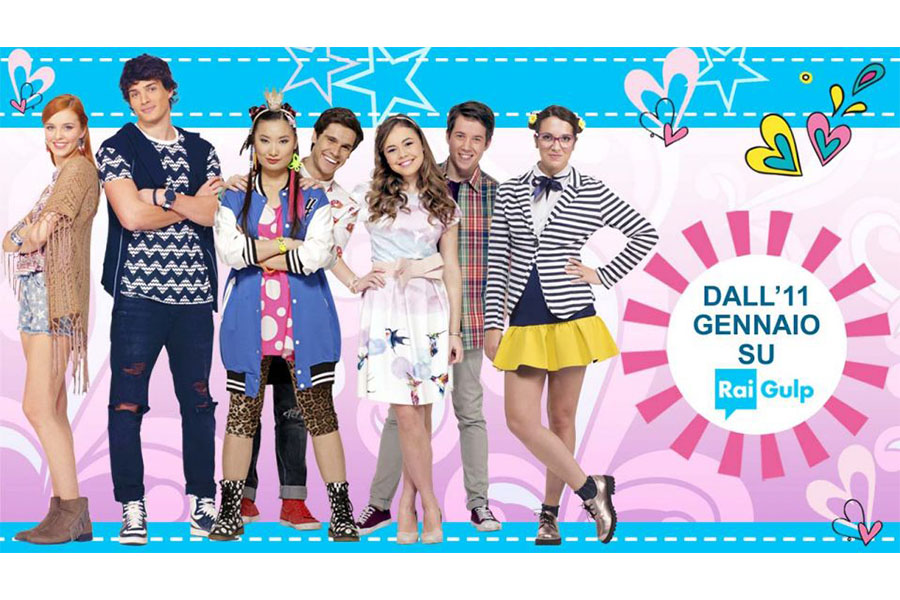 A new school year full of challenges, a new teacher, a rival music band, love affairs and troubles for the two protagonists, for the series that will captivate more viewers young

After the great success of Season 1, Gulp “Maggie & White Fashion Friends” is back on air on Rai Gulp. The totally live-action series – in co-production with Rai Fiction – will be part of the every day programming starting on Wednesday, January 11, 2017, at 08:05 pm on Rai Gulp (management Rai Ragazzi channel), as an exclusive.

“Maggie White Fashion & Friends” is the new project created by Iginio Straffi focused on the worlds of fashion, music and friendship with two main characters Maggie and Bianca: two girls with diametrically opposite mindsets but with a common passion for music, both attending Milan Fashion Academy, one of the most prestigious fashion schools worldwide.

Series 2 begins with the new school year carrying many challenges for the two girls and their classmates and band members Quinn, Jacques, and Eduard. The young players will, in fact, have to face not only the arrival of the new professor Roger Falqués – Former pop star that will put them in front of tasks never dealt with before, as for instance the preparation of a musical for the stage win in a major theater – among the challenges, they will have also to face the competition with a rival music band: the hated CoolGhost which will enter the Academy to attend the first year. With a more rock, Gothic and cynical approach towards our protagonists, who together founded the Moodboards, the CoolGhost seem to be formidable opponents with which the competition will be really turned on.

Teachers, then, will put our players in front of very ambitious goals, such as to prepare an entire issue of a fashion magazine, organize a big gala at the Academy or win the end of the year prize stage at a prestigious Italian fashion house.

In this more challenging than ever scenario, Maggie and Bianca are facing hard times – if after their first clash they had learned to appreciate each other, to find out at the end of the first series to be sisters this reality will make their relationship even more confrontational. Maggie accuses Bianca of being the reason why she never knew her father and Bianca feels that Maggie is responsible for the difficult relationship with her father who is still in love with Maggie’s mother. The two girls will be one against the other for most of the season but, over time, they will realize that it makes no sense to wage war, and will ally to prevent their parents from falling in love again; although they will continue to be totally incompatible, at the end of the day they will restore and strengthen their honest, sincere and spontaneous friendship.

Between study and music, Series 2 will be full of heart problems. As a matter of fact, the relation with CoolGhost will bring not only a strong rivalry but also some unexpected feelings. Bianca finds out to be incompatible with and is fascinated by unpleasant, gloomy and unbearably charmful Felipe; Maggie has to face the hard choice between Jacques and charming and with a lot in common with her Andrew, the leader of the rival band.

Although there will be challenges and conflicts at the end kids will discover that the real keys to success stories are comparison and collaboration.