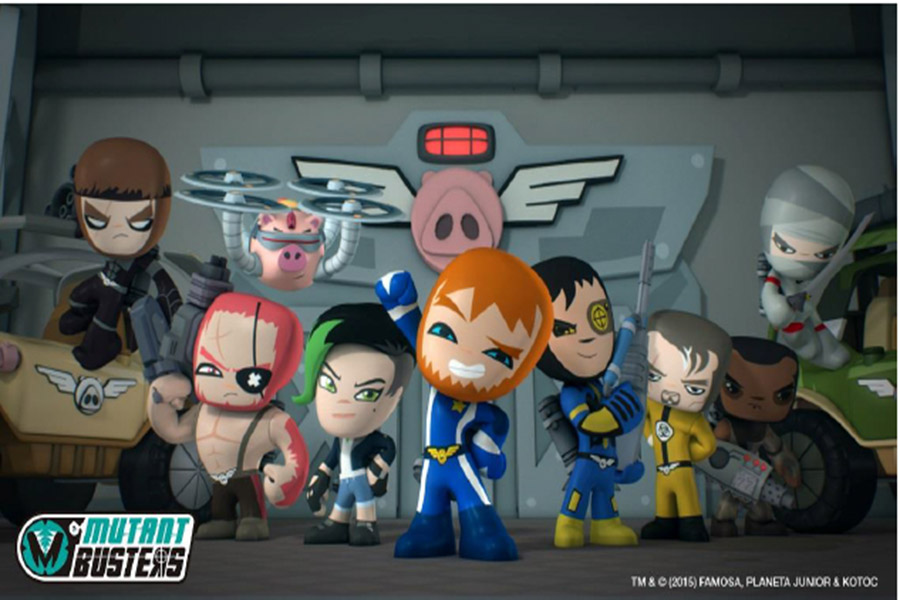 France, Italy and Israel have been broadcasting the series since August 2016 and now the series is available on Netflix.

Crazy animated comedy MUTANT BUSTERS, co-produced by Planeta Junior, a leading European children’s and youth entertainment company, toymaker Famosa, and Kotoc, in collaboration with Neox Kidz, has achieved a strong international launch thanks to an international distribution agreement with Netflix, in addition to TV broadcast and toy distribution deals in France, Italy and Israel.

Thanks to the agreement between Planeta Junior and Netflix, the first 26 episodes of MUTANT BUSTERS are now available on the streaming service.

Famosa launched the MUTANT BUSTERS toy line in France last quarter of 2016 as well as in Israel. It will also be launched in Italy during the first quarter of 2017, where Planeta Junior has already closed licensing agreements with Lisciani (educational toys), IBrand (fashion) and Pon Pon Edizione (publishing). Besides, this Christmas Famosa has launched a new product line in Spain inspired by the Snow environment, which will increase the roleplay range in addition to the Morphoblaster or the Sheriff Plate Projector.

In France, MUTANT BUSTERS premièred on pay TV Canal J in April 2016 and was one of the channel’s best releases in recent years, akin to hits of the scale of Pokemon or Power Rangers. The series has also been aired free on Gulli since August 2016, where it’s is doubling the average ratings for the channel. In Israel, the series has been broadcast on pay TV Junior Channel since August 2016 and Discovery K-2 has been broadcasting the series in Italy since September 2016. Neox Kidz has been broadcasting the series in Spain since October 2015 and keeps organising special events such as the eleven-chapter marathon on November 26th.

Moreover, since last Saturday, 15th October, MUTANT BUSTERS fans have been able to enjoy the official MUTANT BUSTERS YouTube channel, allowing them to watch content created exclusively for YouTube including music videos, memes and clips providing more detailed information about the stars of The Resistance and the stinky mutants.

MUTANT BUSTERS was created by Famosa’s creative team. Their alliance with Planeta Junior and Kotoc has produced this great animated series, the first to be set in a post-apocalyptic world created by the horrendous levels of contamination on earth. After the disaster known as the Great Fart, Earth turned into a giant bum invaded by mutants. One of the few surviving humans is a sharpie called Sheriff. He’s ended up leading La Résistance, a guerilla group fighting the monsters. La Résistance scour earth, sea, air and ice to find the vegetables that will allow them to create an antidote to return the mutants back to their original human form. But Wart, the eccentric leader of these strange creatures, and his crazy henchmen will do anything to stop the rebels.

← "LOVE, DIVINA" gets SUPER! sale in Italy SUPER WINGS ready for take off on KiKA in January 2017 →