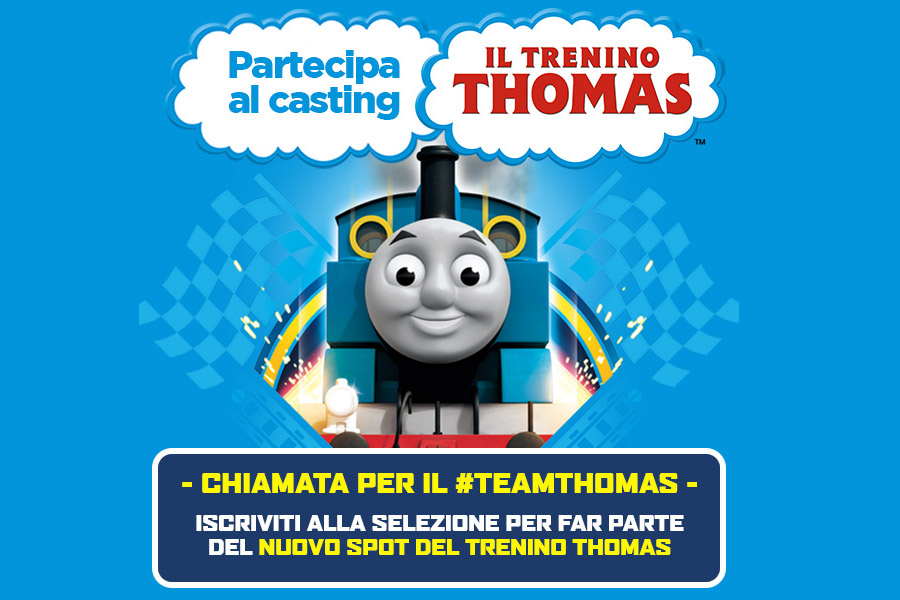 Thomas the Tank looks for a new playmate

Tags from the story: Thomas the Tank.

Participate in the casting and become the new face of the ad campaign for Thomas & Friends.

Thomas the Tank Engine is looking for a special friend to make part of #TEAMTHOMAS, someone who is able to best mirror all of his most important values: friendship and team playing! There is time up until 13th December to enter to become part of Thomas the Tank’s team at Mattel Italia’s online casting service, and to become the new protagonist of the advertising campaign of the locomotive friend of all children.

Participating in the selection is very east: if your child is between 3 and 7 years of age, until 13th December 2016 you can log onto the website at http://www.lascatoladeigiocattoli.it/promozioni/teamthomas and fill in the registration form, entering all of the required information including the age of the little one.

At this point it will be possible to upload a photograph that should show the full bust of the child, as he/she interacts with one of the protagonists of Thomas & Friends. The deadline for the selection process is by the end of 18th December 2016, as ten photographs will be selected to pass through to the second stage of the selection.

The parents of the ten chosen children will then have to upload, via their own account, a video of maximum 1 minute in length, in which the child will appear both in full body and in the foreground, while he/she reads with Thomas. Videos have to be sent in between 19th December 2016 and 7th January 2017 and before 31st January the three children will be selected to pass over to the third stage of the selection process.

The parents of the selected children shall be contacted for a last audition that will be held in Milan. Before 28th February 2017, the new protagonist of the Thomas the Tank Engine ad will be chosen.

All information and complete rules are available on the website at http://www.lascatoladeigiocattoli.it/promozioni/teamthomas/.