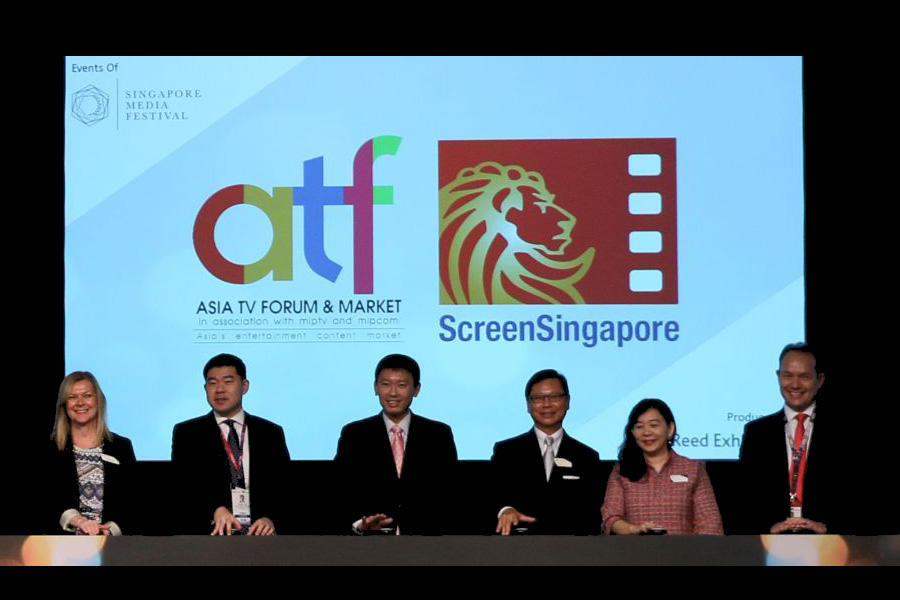 ATF and ScreenSingapore 2016 returned with its largest edition

Tags from the story: ATF, ScreenSingapore.

Asia TV Forum & Market (ATF) and ScreenSingapore 2016, Asia’s premier entertainment content market and conference, was officially launched the 7th of December by Mr. Chee Hong Tat, Minister of State for the Ministry of Communications and Information.

Part of the Singapore Media Festival (SMF), this marks the 17th edition of ATF and the 6th edition of ScreenSingapore. In line with this year’s theme of “Content on every screen”, the market floor featured the latest offerings in TV, film and digital media. Concurrently, industry luminaries deep-dived into the latest trends at the conferences, equipping delegates with up-to-date insights that allowed them to stay updated on industry movements.

Over 5000 attendees from all over the world are expected to convene from 6 to 9 December 2016, to exchange insights and acquire knowledge while securing opportunities to buy, sell, finance, distribute and co-produce.

“ATF and ScreenSingapore 2016 has once again brought together the most influential and brightest minds in TV, film and digital media. With several perennial and new elements tailored to meet the needs of the industry, we expect the market floor to be abuzz with activities, just as rigorous discussions and knowledge exchange take place at conference. Coupled with abundant networking and partnership possibilities taking place over the four days, we are thrilled to play a significant role in advancing Asia’s content industry,” said Yeow Hui Leng, Senior Project Director at ATF and ScreenSingapore, Reed Exhibitions.

With virtual reality (VR) making its foray across various content platforms, ATF and ScreenSingapore introduced Digital@ATF at the market. This new zone houses Digital Corridor, a showcase of the latest and most innovative technologies that support this growing appendage. Also within the area is a VR & Transmedia showcase, where award-winning VR productions such as “Notes on Blindness: Into Darkness” and “I, Philip” immersed delegates into an alternate reality. Attendees can also participate in Transmedia Producers Workshop sessions, to hear from key players about opportunities and issues in this new burgeoning arena.

Over 90 industry experts to steer content industry at conferences

Besides the latest and freshest content from all over the world, ATF and ScreenSingapore presented compelling insights from the industry’s brightest masterminds, providing delegates with the keys to navigate Asia’s dynamic content market.

Later today, Junior@ATF welcomed another industry stalwart, Seung-Hyun Oh, Chief Creative Officer of MNC Animation (Indonesia) for a keynote on “Wee Watchers, Big Business”, that shed light on changing landscape of kids’ content, challenges facing the industry and how Asia is rising in this lucrative segment.

Another mainstay of the ATF conference, Formats@ATF (8 December 2016), focused on “TV’s Future in Asian Formats” this year, providing intelligence into regional trends and opportunities.

Adding to the power-packed line-up, the ATF conference shined a spotlight on China, Indochina and Southeast Asia, with new Market Focus sessions where influential in-market veterans and analysts are expected to intensify interest in these key territories.

On 9 December 2016, ScreenSingapore gathered some 30 film luminaries from Southeast Asia and beyond to address present-day concerns faced by filmmakers in the region. Themed “The New Independent: Producing for a Globalised Film Economy”, the Southeast Asian Film Financing (SAFF).

Conference focused on topics including film financing, strategies for generating return-on-investment, the perfect pitch package, and trends in the regional industry. Amongst high-profile industry leaders present is Kathy Morgan, Executive Producer of Academy Award-winning “The Danish Girl” (USA), who delivered a closing keynote titled “Producer or Distributor: The Sales Agent in Hollywood and the World”.

The SAFF Conference is a part of ScreenSingapore and is co-organised by the Southeast Asian Audio-Visual Association (SAAVA), and supported by Ties That Bind: Asia/Europe Producers Workshops (TTB),

To facilitate an exchange of ideas and talent between the international and Asian content fraternities, ATF and all3media International have introduced the first-ever ATF Formats Pitch. This premier Asian pitching competition is a platform to connect Asian-based producers and their in-development unscripted formats with commissioners, investors and co-production partners.

From a pool of entries representing Australia, China, Hong Kong, India, Malaysia, Singapore, Taiwan, Ukraine and USA, five finalists were shortlisted for a live judging session on 8 December 2016, where selected producers presented their new and original, non-scripted entertainment formats to a star-studded jury. A S$20,000 prize from all3media International – comprising a cash award and consultancy package – awaits the winner on 8 December 2016. More information about the five finalists is available in Annex A.

Providing another platform for Southeast Asian film talent to shine, the SAFF Project Market returned for another edition, after a successful first year in 2015. Of the 10 shortlisted finalists in 2015, 4 projects are currently in production and scheduled for release in 2017.

A partnership between ScreenSingapore, SAAVA and TTB, and supported by the Asia-Europe Foundation (ASEF), this pitching competition is Southeast Asia’s first co-production project market that aims to match promising feature-length projects with a global network of media financiers, distributors, and collaborators who can bring these project to fruition. This year, 15 finalists from Cambodia, Indonesia, Malaysia, Singapore, Thailand, The Philippines and Vietnam had been vying for the cash prize of S$20,000 to jump-start their feature-length films. The winner had been announced at a prize giving ceremony on 9th December 2016.

For more information about the event, please visit www.asiatvforum.com

← Geronimo Stilton with dogs and rabbits for the little ones at the Linate and Malpensa airports. Thomas the Tank looks for a new playmate →